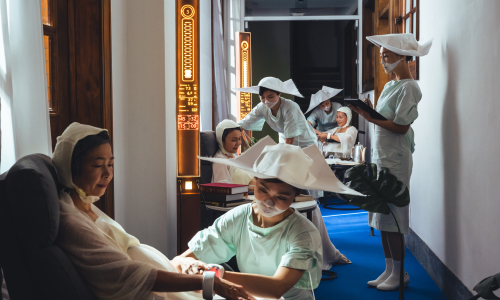 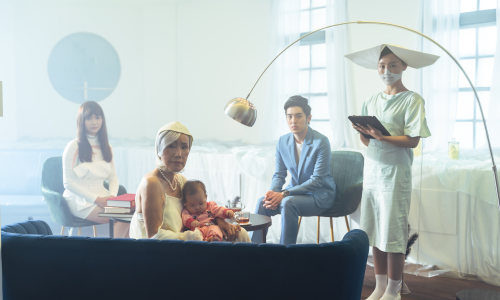 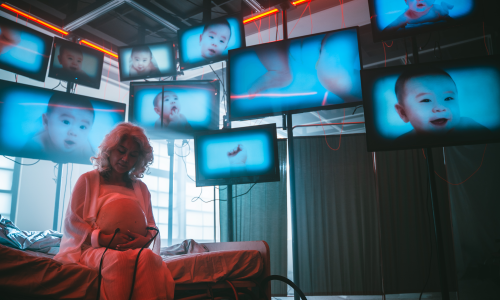 What if grandmothers could be surrogate mothers in the future? Grandmom Mom constructs a series of future scenarios to explore the ethical and social issues associated with the reproduction technologies of future human societies. It also tries to dig deep into the complicated and contradictory emotions of parent-child relationships.

who worked on the project?

Grandmom Mom is initiated by artist Kuang-Yi Ku. In the three-year development, Grandmom Mom has been continuously joined by new participants, including our producer, medical consultant, VR director, playwright, visual art advisor, science communication researcher, project manager, project dramaturg, etc. The expansion of staff occurred across several disciplines, because the closer to humanity and ethics artistic contents become, the more fragmentary a single branch of knowledge appears to be. And yet we become ever more certain that we must weave a more comprehensive web to sustain human feelings, which cannot be divided across disciplines. This production team traverses art and science, and fixed roles in it are almost non-existent. Every participant contributes their personal expertise, experience, and feelings to continue co-creating with one another over time. We try to use plainer and even plainer—though not necessarily simplified—words to describe what we understand and how we feel, so as to converse with others and graft our ideas together. We see this as a process of restoring knowledge, returning specialized knowledge and technologies of different disciplines back to a state in which interaction among them is still possible. Only in this way can art bring knowledge back together through interpersonal association. This is the condition to enable the reproduction of knowledge in the process of art. This journey of restoration and reproduction leads us back to the position of humans.

what is the project About?

In countries where surrogate mothers are legal, there have been a few recent incidences where the daughters or daughters-in-law were infertile so that their mothers agreed to be the surrogate mothers of their grandchildren. This project proposes the possibility of giving this option to women who are at their pregnancy ages but wish to focus on their careers, so that their eggs and their partners’ sperms can be fertilized in vitro and placed in the wombs of their mothers or mothers-in-law to give birth to their offspring. In this scenario, women can focus on their careers, and their retired women mothers, who no longer need to worry about their jobs, can fully focused on their pregnancies. In this system, every woman in every family can ask the willingness of their mothers to become pregnant for them; when they retire, they can do their daughters a favor to become pregnant for their grandchildren. Generations after generations of women can focus on their careers when they are around 30 years old, and give birth to their grandchildren when they are 60. Grandmom Mom constructs a series of future scenarios to explore the ethical and social issues associated with reproduction technologies of future human societies. It also tries to dig deep into the complicated and contradictory emotions of parent-child relationships.

what has happened since it was first developed?

During the exhibition and performance of Grandmom Mom, we have been working with a science communication researcher to host workshops and interviews with the audience to collect their reactions. After that, we used these data for academic research. We hope the art and science collaboration can not only contribute to the art world but also has academic value.

what are you working on now?

In 2022, I won the BAD Award (Bio Art & Design Award) for a collaboration between me and scientist Henry de Vries. We are working on the project “Atlas of Queer Anatomy” which aims to challenge medical patriarchy and heteronormativity of anatomical education by expanding these to include speculative queer anatomies, and to unfold the anatomical interpretation of sexual minorities. Moreover, it explores the symbiosis between humans and microorganisms, resulting in ambiguous body borders. The result of this collaboration will be shown in the BAD Award exhibition starting on December 16 at MU hybrid art house in Eindhoven.